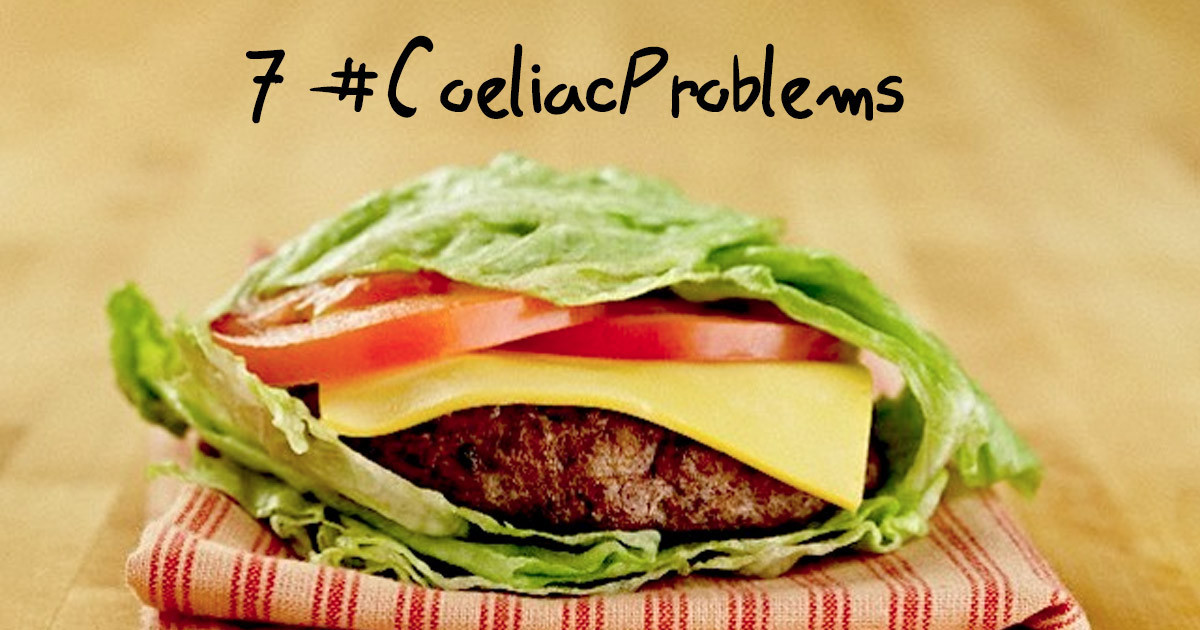 We face all kinds of problems when it comes to being Coeliac, here's a little lighthearted post focusing on those annoying frustrations.

There are some problems no other person would face, as a Coeliac we get our fair share of Coeliac problems, you know those little things that one effect you when you are Coeliac or have an allergy. Here's our top 7 Coeliac problems.

1.Asking for the burger without a bun
It's natural to crave what we can't have, McDonalds is a major one and their big mac without a bun is gluten free... but we still find it a tad awkward asking the staff for a burger without the bun then casually whipping out our own gluten free bun at the table hoping no one notices (and it just isn't the same when places but it between two lettuce leaves. I'm not a rabbit!)

2. Eating before you go to a party because you know there will be nothing for you
We've all done it, made sure to eat before hand in anticipation of the gluten filled buffet options. All the sausage rolls, sandwiches and quiche and we're left with the salad decorations which have been contaminated by everyone elses grubbed hands. Of course you do get some people that have gluten free buffets...occasionally.

3. Having to explain exactly what Coeliac Disease is
Any other problem you wouldn't have to explain, you have an allergy as soon as you mention anaphylaxes restaurants are all over it. You mention Coeliac you have to explain EVERYTHING in detail including how they should prepare their food and your bathroom schedule if they don't adhere to those instructions.

4. Watching servers and trying to glance into the kitchen to make sure they use clean utensils and preparation area
We're very guilty of this one, as soon as there is an open kitchen those chef's must think we're from Food Standards Agency the way we glare at them, making sure normal bread doesn't come within 10 feet of the gluten free bread and watching to make sure they grab a fresh butter and knife.

5. When everyone has a Chinese and you have to make your own using Japanese soy sauce.
Don't you just hate it when the family wants a Chinese, your local doesn't do gluten free so you end up making your own while the rest of the family lounge on the sofa eating theirs. And not only that you make your Chinese using the Japanese equivalent of soy sauce so you don't actually end up with Chinese...

6. Guarding your toaster to keep it safe from stray crumbs.
No one else guards their toaster but you can guarantee as soon as you can't eat gluten someone will "forget" and put normal bread in your toaster. Especially if your toaster is in work.

7. Odd dreams involving cream cakes and bread
Ever had a dream where your riding in a car made of bread with bagel wheels while watching some sexy looking chocolate eclairs walk down the street? Glad I'm not the only one with an odd subconscious mind.

Why not take a look at our other mildly humorous blog too - 14 things not to say to a Coeliac and Are you a Celeriac?