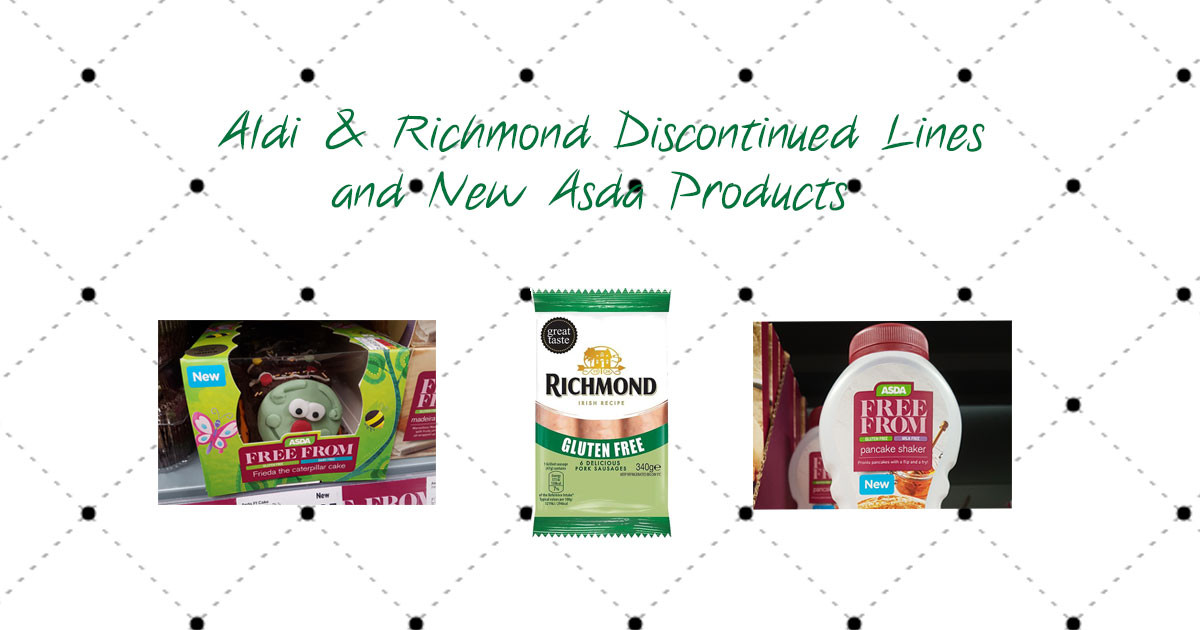 So many blows to the gluten free community. Aldi have scrapped their permanent free from range (in those stores lucky enough to have it) and Richmond has discontinued their gluten free sausages. At least Asda have added some new things!

We have both good and bad news in this blog, there has been a few things going on so here is a blog to round it all up.

Next bit of bad news is from Aldi, some stores had a dedicated gluten free range, most stores didn't have this too start with so not so much of a blow to us lot, but those that did have the gluten free range, this range has been discontinued, from what we have heard, all that is being kept from this range is bread, everything else is going.

Not to worry though Aldi have an excellent gluten free range without the dedicated section as most of us who didn't have the range anyway will know, only problem is you have to hunt around for it, it is all mixed in with the regular stuff and there is always other gluten free products coming in on specialbuys. So for the most part this isn't a huge blow but is a heads up for those who have got used to dedicated sections.

Last week we mentioned Asda had some new chilled gluten free products in stores, this week more new products have arrived, this time in the ambient section. We noticed last week shelves were looking bare so we were anticipating new arrivals and weren't disappointed when new stuff started drifting in this week.

First items that started to appear were some new bread rolls and brown and seeded loaves. They have only been in store a week and we have already heard some good reports about the new bread so it looks like it's some decent bread. The loaves are only £1.84 too so some quite cheap loaves too, especially when it comes to gluten free.

Tesco have had a similar one of these in for a while, however in Asda "Frieda" the caterpiller has hit the shelves, a gluten free and dairy free caterpiller cake perfect for the kids and parties. It is fairly large but to me sounds a tad expensive at £6.25.

A couple of new packet mixes have also made an appearance, Tutti Frutti Fairy Cakes and Chocolate Cookie Sandwich Kit, the tutti fruiti cakes are gluten free while the the cookie kit is both gluten and dairy free. Both are £1.99 which is a pretty decent value if you want a quick packet mix.

Another one thats been in other supermarkets are while are porridge pots, Asda have hit the bandwagon with that one introducing gluten free porridge oat pots, both original and golden syrup flavour and only 65p each, ideal if you are ok with oats and want something quick for breakfast.

The final new product we found was a pancake shaker bottle, something I have never seen gluten free before. You see them every year for pancake day but never before seen a gluten free one, it is certainly something that could be popular around this time of year. The shakers cost just £1.50 which is about the same as a regular one.

Hopefully this isn't the only new stuff that comes out in Asda as there was still a few gaps to be filled on the shelves. We will update you if and when more new products come out.