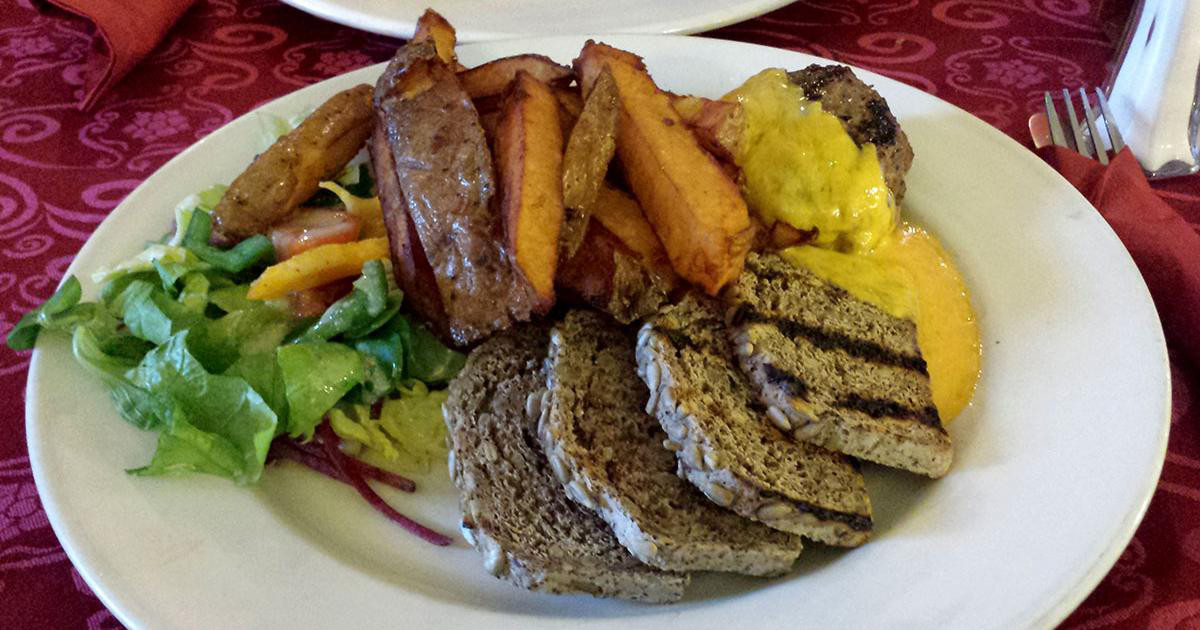 Golden Fleece
16 Pavement
York
YO1 9UP
01904 625171
Visit Website
Since this review was done, the Golden Fleece's menu has been updated and they don't offer much gluten free unfortunately

To be honest, we weren't sure where we were going to eat when we ended up at the Golden Fleece, my boyfriend wanted to go to Nandos but I didn't, so I took to my favourite past time of looking online for restaurants and pubs in York that could do gluten free for me. One of the first ones I came across was The Golden Fleece but kept looking as the other half wasn't sure if he wanted to go there. In the end he did give in to my whining and we went into the most haunted pub in York for our tea.

The place itself is very old, very lobsided and apparently full of ghosts (unfortunately I never had any encounters with anything there, but would love to go and stay there one day as I love all things ghostly). Walking through the main bar area the light was quite dim giving it that authentic old pub feel, the restaurant part itself is in the back with extra seating upstairs, up some very wonky stairs and past a suit of Armour that looked like it would jump out at you at any second.

We went upstairs and a few meals came out but no one came and offered us menus at which point we realised we must have to get them from the main area downstairs. After retrieving some menus I saw there was a part in the menu that was dedicated to gluten free, options for main meals are limited to gammon, burger, steak or mixed grill (minus the sausages), so not much choice on that side, but they do also offer sandwiches and jacket potatoes and starters. From what I could see there was no option for gluten free desserts unless there is any on the specials board.

I opted for the burger which came with a choice of cheddar, blue cheese, chilli or mustard topping and a gluten free bun with chips and salad. I went downstairs to order and asked if mine would be prepared separate, she said it would and that the chips would be in a separate fryer.

The food took a little while to come, but they were extremely busy, the food was fresh and hot when it arrived so I can't complain about the half hour it took to come to us, for the amount of people coming in and out it is a wonder it didn't take longer.

When mine arrived I looked round at other peoples plates, just because my chips looked different, everyone else appeared to have frozen precut chips whereas mine were hand cut potatoes still with the skin on, rustic style. From that I could only presume one thing, the frozen must have contained wheat flour so I was given different chips.

The burger was handmade and very pink and juicy in the middle with a chargrilled outside, topped with melted cheddar. When the dish arrived the waiter told me there was no buns left, so instead they had given my 4 slices of gluten free bread with the burger, I had no complaints about that, bread works just as well as a bun. I could have eaten that burger over again, it was so delicious and tasty.

Overall despite the limited options, The Golden Fleece is excellent, the dishes are tasty and reasonably priced, they are knowledgeable about cross contamination and generally nice people, even though the place was packed out the lady behind the bar took the time to reassure me my meal would be done separate. However it would be nice to see a gluten free dessert which is always on the menu, not just on the specials board (if there was one).