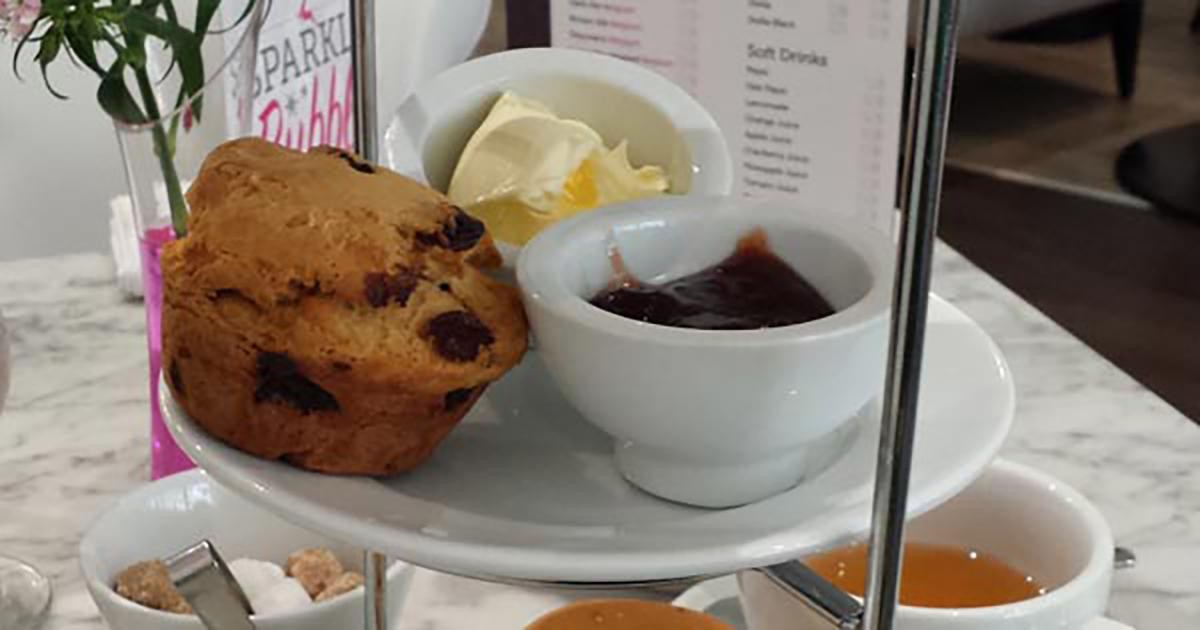 58 High Street
Manchester
M4 1EF
0800 0434242
To be honest, I would expect Manchester to have a lot of choice in the way of gluten free, granted it does hold more options that some places but still not a great lot of variety. I tend to look around Facebook a lot for suggestions and one that popped up a lot for Manchester was Tea42, turning my attention to their website, the first thing that stood out was the price rather than the whole host of gluten free on offer. It definitely isn't the cheapest place you could go.

Anyway, since I was on my way to a concert in the city and wanted somewhere to eat me and my boyfriend decided to try it as a treat, and if it was going to be a treat I decided I might as well go the whole hog and have an afternoon tea (which was £19 for the cheapest, they also offer two other afternoons teas). Around 95% of the menu, if not more, can be made gluten free so I definitely wasn't stuck for options, not only can they do gluten free but they can also do a whole host dairy free as well as vegetarian or vegan.

The waiter was very nice, I asked for a gluten free afternoon tea and he followed up by asking if I needed any other requirements catered for and they would make sure it met all my needs, since I am ok with cream and butter despite the dairy intolerance I didn't ask for it to be dairy free as well, just kept it gluten free, however I did like that they had the option of being able to have it both or even vegetarian if I wanted.

The place was very clean, tidy and posh looking, there was a poem on the wall by the entrance which I didn't notice when I walked in, but my boyfriend pointed it out after, all about gluten free and their hashtag of we love gluten free (#weloveglutenfree) which they use on twitter, a nice touch to read while waiting.

The food arrived and I can't say it wasn't stunning because it was, the first tier consisted of half a bagel with cream cheese and salmon (one of my absolute favourites which I am willing to suffer a little tiny bit of stomach pain for), a slice of white bread half spread with egg mayo and half with a cheese and onion type spread and some bread which I wasn't sure of which was filled with a slice of cheese and tongue. The first tier alone was amazing in itself, so much variety and different flavours.

The second tier played host to a gluten free scone, homemade cream and jam. The scone was nice although it did appear to have more of a bread texture in my opinion but was very nice all the same.

Top tier was definitely my favourite, holding a slice of gluten free battenburg, a macaroon filled with marshmallow fluff, a slice of what appeared to me like a chocolate cheesecake type thing and a little glass pot of a raspberry eten mess (it was basically cream with meringue pieces, raspberry sauce and fresh raspberries. It was hard to believe that the whole thing was gluten free.

Other stuff on the menu included breakfasts and sandwiches, all which can be made gluten free, their milkshakes can also be gluten free, my boyfriend had a delicious looking mint chocolate one which I would love to have tried but didn't want to push my luck on the dairy front!

It really was a lovely afternoon tea, as a treat I would definitely go back, but it's not somewhere I would use on a regular basis, food is good and the staff are very knowlegeable and know what they are doing, it's just a bit too expensive, especially when I've seen afternoon teas on the same scale for about £5 less, but as it is so nice I would definitely return for the food as a one off.