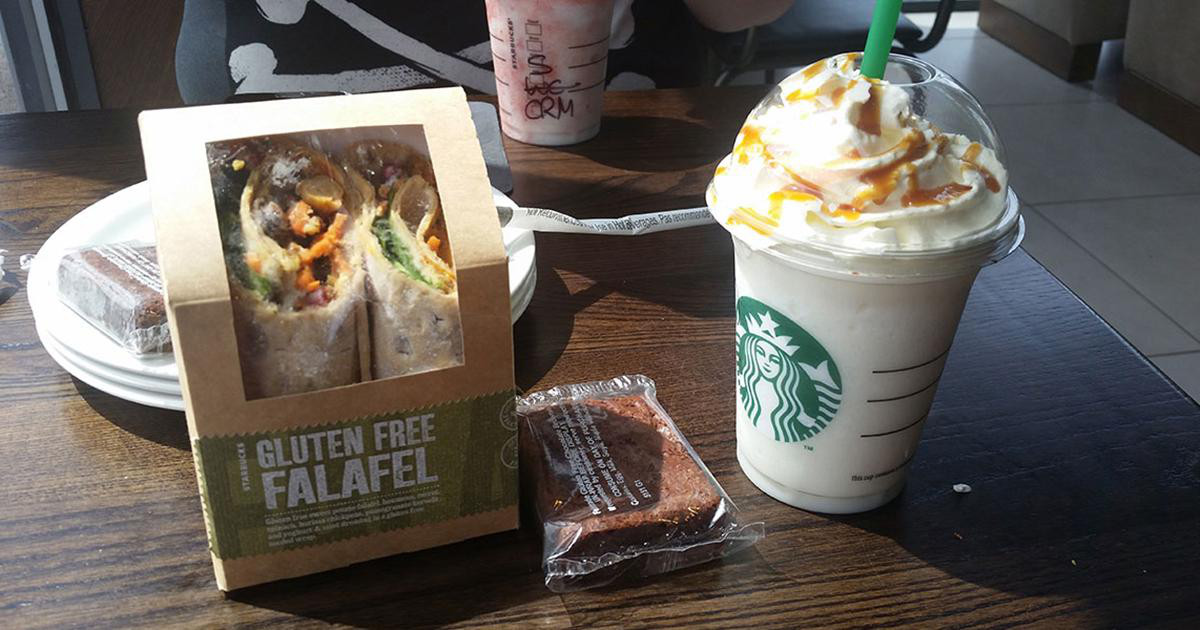 Wolstanton Retail Park
Newcastle-under-Lyme
Staffordshire
ST5 0AP
01782 619983
Visit Website
I have actually been in a few Starbucks now but most of the time it's usually only a drink and a brownie as they sell out of wraps so quickly, however there have been two occasions now that I have managed to get my hands on the wrap and the experience at both outlets I coincidentally had almost identical experiences, these being the brand new Starbucks in Wolstanton, Stoke on Trent, and the Little Eaton, Derbyshire branch.

Despite having similar experiences at both, Wolstanton is definitely one that will stick in my mind. I got the last wrap from the fridge which I was delighted about as I was starving and headed to the counter, the lady on the counter was amazing, thoroughly aware of Coeliac and cross contamination. I asked for a brownie wrapped and there was no issue with this as usual (for anyone that has trouble getting a wrapped brownie at Starbucks, point out to the staff that the packet actually says on it "sell in packet if requested by the customer"), another girl who was running round grabbing bits for orders automatically went to get one from the cabinet. The lady serving us shouted to her, "no get one from the fridge", the other girl looked at her like she had two heads, but with no word from me our server said "the lady has a gluten intolerance, get a wrapped one from the fridge", I hadn't mentioned I was gluten intolerant, it was just an assumption on her part but it was nice she did assume that when I asked for a wrapped brownie.

Looking confused the girl did what she was told and went and got one from that fridge, feeling embarrassed i said to the server "it's a pain being gluten intolerant", her reply was "don't be silly, we wouldn't sell them wrapped if we weren't allowed too, and you can guarantee it hasn't touched anything else". I think this is the first time someone has thoroughly understood without me having to explain cross contamination. We had an almost identical experience in Long Eaton too, so I presume from this that Starbucks train well when it comes to allergies.

After getting our food and drink, we took a seat and I was expecting to be disappointed by the wrap, having had Costa's and not reckoning much too and this being vegetarian (not a fan of vegetarian myself) I didn't have high hopes, however I was proved very much wrong, it was delicious. Extremely tasty and full of flavour, the wrap was nice and soft and their was plenty of filling, definitley beats a lot of other wraps I have had! The caramel creme frappachino I had also made a nice chance, I usually have strawberry but since all the creme frappes are GF I thought I would try something different, in my opinion doesn't beat the chocolate or strawberry but still very nice.

Having heard other peoples views on Starbucks I know some people don't like their service but I can honestly say they have always been very knowledgeable, friendly and willing to find out the answer to anything I have asked, and definitely had no trouble getting hold of a wrapped brownie unlike some reports I have heard. If you are lucky enough to get your hands on a wrap make sure you try them they are delicious, but they do sell out fast!