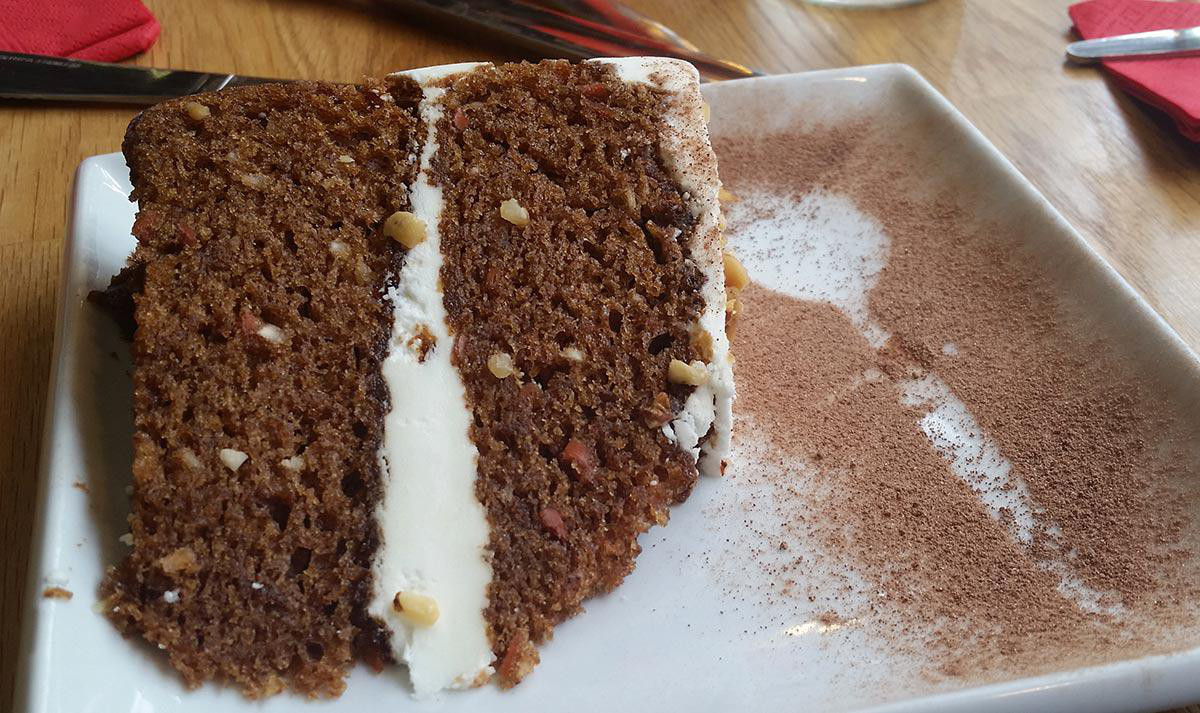 2 St George's Street
Tenby
SA70 7JB
Wales
After a long drive round the coast, we desperate for food when we got to Tenby, walking up the lovely cobbled street I was keeping my eye of for somewhere we could all eat, not easy when you have a gluten sensitive, a fussy eater and someone with a severe allergy to colourants to feed.

Ordering was at the till so I went up with my Mum as I saw there were cakes up there, nothing like scoping out dessert, and also to ask my various questions. Deciding I fancied tuna mayo sandwiches, I asked the waitress if the mayo was gluten free to be greeted with "Gluten? Um, what's gluten? Oh wait that's wheat right? I don't know, I'll get the boss". Leaving was pretty much 90% in my brain by then but I thought I would hear out what the boss said. Few minutes later we were told that the mayonnaise wasn't gluten free and my sandwiches would be prepared away from the others to prevent cross contamination. After a bit more conversation I was satisfied it was just the first server that didn't know what she was doing, maybe she was new, I don't know, but I was convinced the rest knew what they were doing. Changing my mind to a ham sandwich since anything with mayo on was out of the question, we placed our order and sat down.

After 15-20 Mins we finally got our food, mine being carried out first. I waited for the rest to come out before touching mine, I had to make sure my bread at least looked different to the others and I was happy to see it was different, the second thing that struck me was that everyone else's had coleslaw with it but mine didn't. Pleased to see the chef and owner obviously understood what they were doing since we found out earlier mayo wasn't safe for me I tucked into my sandwiches. They were really good sandwiches too, never before have I seen sandwiches skewered together before, was a nice detail to them.

Knowing there was gluten free cakes on the go, I had to try one. This time it was a different server so I asked what was gluten free and this one knew what I could and couldn't have. There was a good 6 or 7 choices available, the majority of them were in a chill cabinet, with just two on the top covered separately to prevent cross contamination with anything else. There was also none GF in the fridge cabinet but they were away from the gluten free on separate levels. Choices included Tolberone Cake, Carrot Cake, Chocolate Cake and Brownies, I decided on a carrot cake and my boyfriend had a chocolate, so naturally I tried a bit of his too.

Coming with a dusting of chocolate the server told me she had checked it was gluten free before adding it, so I tucked in and it was delectable, one of the nicest carrot cakes I've had, so soft and moist unlike some cakes, there was a lot of buttercream which was a bit too sweet but the cake itself was amazing.

Overall the place was great once we got someone who knew what gluten was, apart from that one staff member everyone was knowledgeable and the food was great, we'll definitely be back at some point.