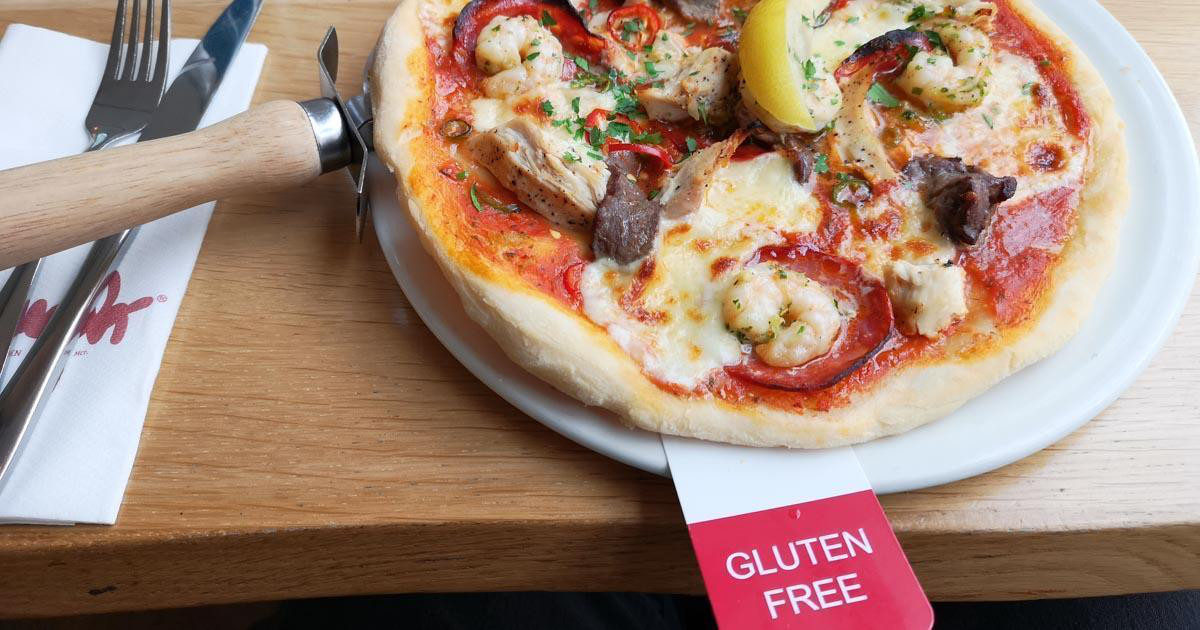 75 - 77 High St
Northern Quarter
Manchester
M4 1FS
0161 8349411
Visit Website
It has been a long time since I ate at Dough in Manchester so when visiting recently we decided to pay them a visit, a change from out usual haunt, Sweet Mandarin which is just up the street.

I'm not a massive pizza eater but do love one occasionally, and when it's Dough it just has to be done.

Dough have an amazing menu with allergens labelled with coloured dots. Almost the whole menu is covered in red dots which indicates a the meal can be done gluten free, that includes pasta dishes, calzone and pizza, the website states that everything can be made gluten free and the dots do validate that remark!

With the huge array on offer it wasn't easy to decide, they have traditional Italian options and also more modernised versions. I decided to try a surf and turf pizza which had prawns, chicken, steak and chorizo on it (in the picture at the top of the page). My Mum chose "Pickle and Mix" which was topped with chorizo, salami and gherkins, a perfect choice for her as she loves gherkins.

We both needed gluten free which wasn't a problem, Dough are really good at making sure there is no cross contamination, they use a separate area to prepare and the waiter told us they only use gluten free flour in the kitchen to toss the dough, even the glutenous dough is tossed in gluten free flour so they know the gluten free stuff isn't going to end up covered in free flying flour.

It was early when we went in and the restaurant was quiet but because everything is cooked fresh it did take a while to get the food which was piping hot when it came.

Our pizzas were absolutely delicious, impossible to tell the dough wasn't full of gluten, it tastes just like proper pizza. They are fab with labeling to so anything gluten free comes out with a label, they also do dairy free and a lot or vegan so if you need it they have dairy free mozzarella, it is certainly rare you can get a gluten and dairy free pizza in a restaurant!

Even though we didn't really have room we both decided to have desserts. My Mum took a fancy to the Cookie and Ice Cream Sandwich which is gluten free and vegan as standard, I opted for the sundae which contained gluten free chocolate brownie, there was a few other dessert options which are gluten free too.

We tried a bit of each others desserts, both were gorgeous, Mum enjoyed hers so much she nearly ordered a second one, and it didn't only taste good it looked spectacular loaded with mixed berries.

Service at Dough is fab, all the waiters were really lovely and happily chatted, both about dietary needs and also general chit chat. We wouldn't hesitate to go back for another meal, reasonably priced, fab staff and mood and right in the centre of Manchester, what isn't there to love.