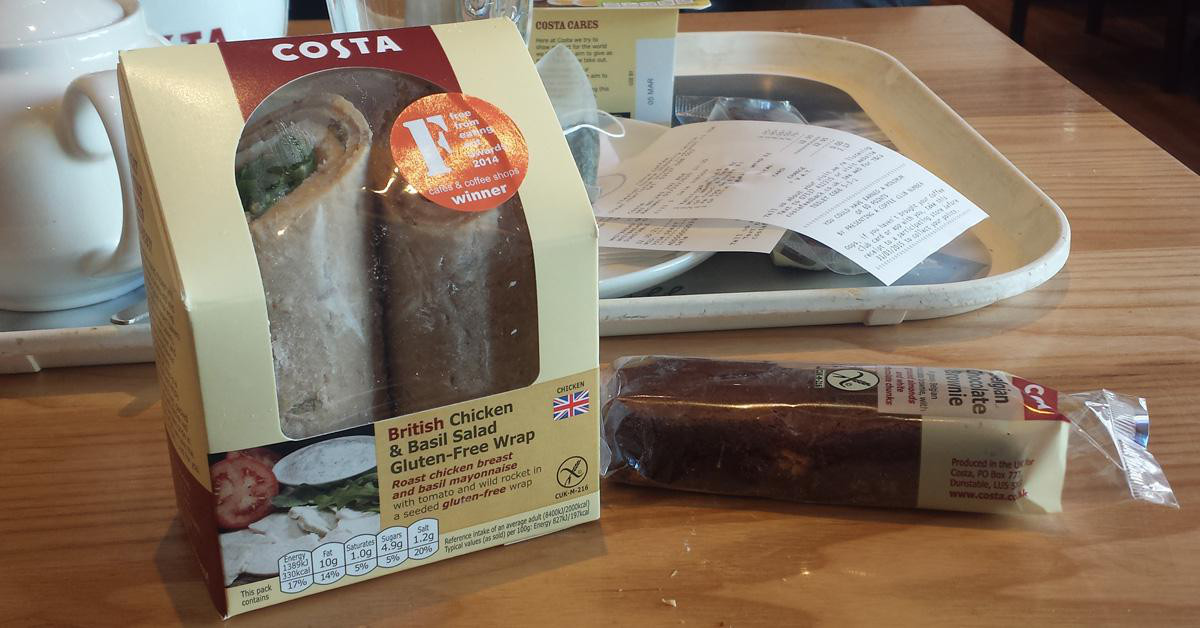 Clayton Square Shopping Centre
Liverpool
Merseyside
L1 1QR
Visit Website
I never really think of Costa as a place to eat, it's usually just a place I go when I want a quick drink and there is nowhere cheaper around. However being in pain and Costa in the Clayton Square Shopping Centre was the nearest place to us, my Mother and I decided to go for a cake and a brew, at that point I'd completely forgotten that Costa offer a gluten free wrap in way of nourishment so was fairly surprised when I saw a gluten free wrap in the chill cabinet even though I knew they had been doing a turkey and cranberry version of it at Christmas.

Since we were there and both hungry I decided to give the chicken and basil salad wrap on offer a go. It's nice they offer something in the way of savoury food, but if you don't like chicken, quite frankly you are stuffed. Having had their gluten free cakes previously I knew these were kept wrapped by the till, so starring enviously at the cake counter (and keeping my eye out for unwrapped GF goodies lurking amongst the gluten which I have heard reports of from a few Costa outlets) I made my way up the queue grabbing a chocolate brownie at the end (I had the choice between that or Cherry Bakewells, at Christmas there was also gluten free christmas cake on offer which was delightful).

At the counter I asked about the hot chocolate as all Costa's seem to have different responses, I wasn't impressed when the answer to "Is your hot chocolate gluten free?" was a vague shrug and a blank look on the baristas face. "Can I see you're allergy list?" Another shrug and a mumbled "I don't think we have one." At this point, to be honest I should have stated that it was now law to be able to either verbally or physically present an allergen list, but I frankly wasn't in the mood, so I gave up and asked for a peppermint tea instead. For future notice I already knew before asking that the hot chocolate is at risk of cross contamination which is what I expected them to tell me and no Costa can guarantee it to be gluten free, some outlets do offer a Best hot chocolate (or used to when I was told about it a few months ago) which is gluten free.

We sat down to eat our food, the wrap was not impressive at all, if anything it was a bit bland. I spent five minutes unwrapping the wrap as I don't like tomato so wanted to remove it, but I'm sure the edge was stuck down with super glue, once I finally managed to get the tomato out I wrapped it back up and took a bite but was unimpressed with the tasteless wrap, even the mayonnaise in it didn't over much flavour. However the brownie was lovely, not as nice as fresh ones you can get from some independent cafes but still nice none the less, very chocolately and pretty moist.

Overall I would say Costa are good if you are in a hurry or there is nowhere else around, if you are in need of food there is at least an option although in my opinion it isn't a very appealing one and at nearly £4, not worth it. If you are wanting hot chocolate, make sure you thoroughly question them, the baristas to me don't appear to be the best well trained when it comes to allergens, you would do better looking at the ingredients online. Unless I'm in desperate need of food I can't say I will be eating in again unless I only want a cake.

I tried the gluten free wrap from Costa this week, I was looking forward to trying it, but it was was very bland with no flavour and the wrap was soggy from all the tomato in it, I won't be buying that again x
Michele Tomkins
5th March 2015