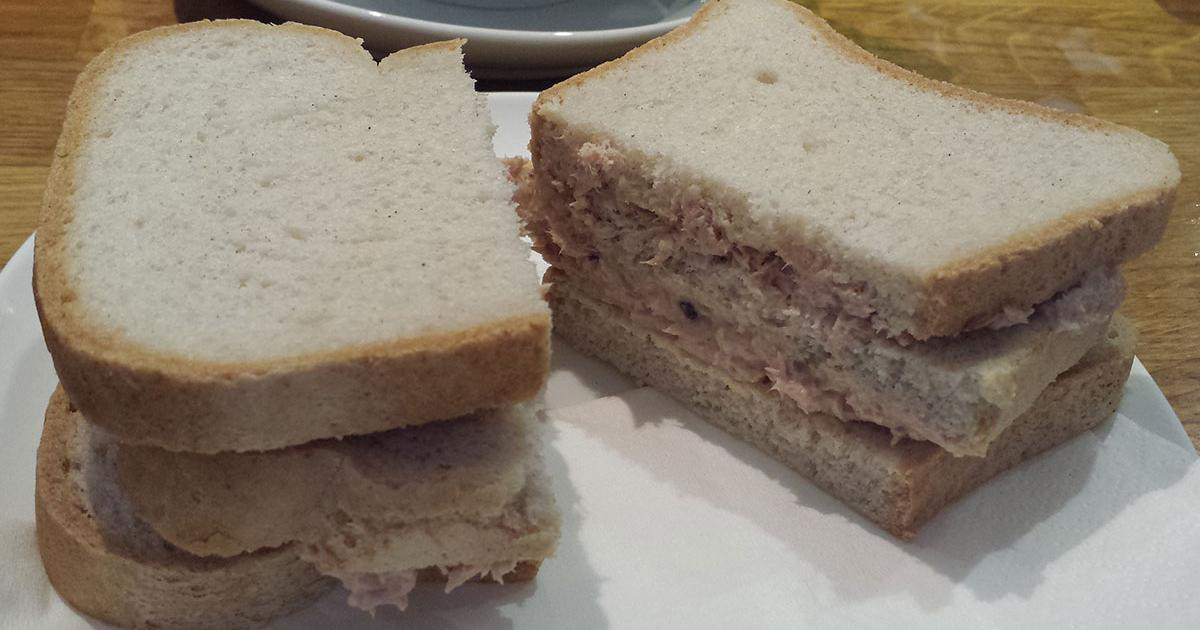 51 Saddler Street
Durham
County Durham
DH1 3NU
0191 3757878
Visit Website
On a trip up to Durham, somewhere I have never been before, we wanted somewhere to eat after going up to the cathedral (slow progress up and down the hill leading up there with my walking I tell you). A place that caught my attention when I was researching online was Be Tempted, as it turned out this place was on the street leading to the cathedral so was really a perfect choice.

The cafe itself really is tiny, there is only a handful of tables and a few seats at the back in front of a food preparation area, which is where we sat, it something of a novelty being able to see what potential cross contamination issues there could be.

There were no printed menus only a board by the door, squinting my eyes to see it because I didn't have my glasses, I decided on a tuna mayonnaise sandwich, I headed to the counter and the server confirmed the mayonnaise was gluten free for me while I drooled over the piles of cakes in the cabinet next to the counter. There was only one type of cake in there I could have despite the sign outside saying "cupcakes" not "cupcake", and I was slightly concerned about how the gluten free vanilla cupcakes were sat uncovered between two trays of normal cupcakes, they were in paper wrappers with an open top, but still a possible cross contamination issue? I think it could be an issue but more on the cakes later.

I went and sat back down to await my food, forgetting I was sat in front of the prep area for a few minutes but I soon remembered though when the lady making the sandwiches asked another girl to go and ask the person on the till if the sandwich was toasted or not. To save the hassle I chipped in and told her it wasn't, something I am glad of since I couldn't see a separate toastie maker for gluten free.

I watched as the lady cleaned up and got my bread out of an airtight box on the side, get a new chopping board and some clean utensils and make my sandwich. I was fine with all that, however after she made mine she proceeded to make my boyfriends none gluten free cheese sandwich on the same board without clearing up. I don't have a problem if that is the order the food is always made with a gluten free order, though I do think it still could lead to potential cross contamination issues but only if they accidentally make the none gluten free afterwards. Otherwise I must agree the cross contamination prevention was pretty good compared to some places, they cleaned up before, the used new utensils and straight after finishing our order they were washed up.

The sandwiches usually come with coleslaw and crisps, however I didn't want them, if you go please check they are gluten free, as my boyfriend had the crisps and we both think they were salt and vinegar which obviously aren't necessarily gluten free, same goes for the coleslaw depending on the mayonnaise.

I couldn't resist the cake, despite them being in with the other cakes, I decided the cases were enough to stop them touching anything else (the paper came a good inch or so above the cake with frosting covering the tops) but I would have preferred if they were completely covered or in a separate case. The server was very good, plating mine up separately and being careful to only touch the wrapper. The cake itself was nice but the buttercream on top was a little too much for my liking, it also tasted of lemon when the cake was apparently vanilla, I would have expected vanilla buttercream.

Reading online they do offer other gluten free cupcakes, all vanilla cakes but with different toppings, on this day I must have just been unlucky as I could only get the one type. Overall I would go back, they seem to have a fairly good knowledge of cross contamination despite me being a bit uneasy with some of the practices, however they do seem to have a nice variety going on, and it is in a brilliant place if you are heading to the cathedral. I will mention however they do charge a bit extra for gluten free, the cakes were about 50p more than standard and they also charged 30p if you wanted soya milk for tea, a lot of places these days don't charge extra but there are still places who do, however that still won't deter me from returning, as long as I can sit in them seats again, just to make sure the preparation of my sandwiches is acceptable.