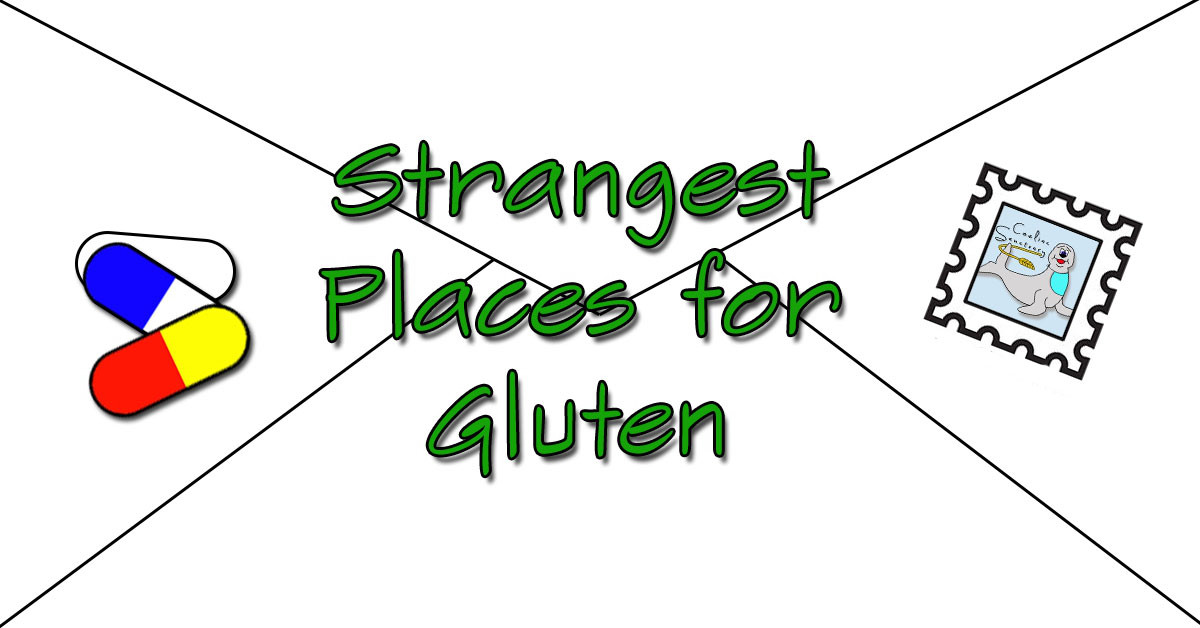 Gluten is common in a lot of food items, but there are some places you wouldn't automatically think to check for gluten. When out shopping for food, for anyone with Coeliac or gluten intolerance, the automatic reaction is to flip to the ingredients and check for that sneaky wheat hiding in the sauces or the barley hidden in the caramel, but when you go shopping for other every day essentials, do you think to check the ingredients? That's if it's even the kind of item that even lists ingredients!

Below is our top 5 most strangest places where we have seen gluten. To some it might be obvious to check a few of these, but we think it's a little bizarre that gluten could possibly be present in some of them.

5. Chewing Gum
Well gluten does mean "glue", so I guess gluten being in gum is always a possibility, but why does it need it, does it make it chewier than gluten free gum? A lot of brands are naturally gluten free, so why do some manufacturers add gluten? Well, strangely, gluten is mostly in flavourings and colourings rather than used as a binding agent. Sure we shouldn't swallow gum but the flavouring is still being ingested, so it can cause a reaction.

4. Cosmetics
Yep, gluten can be found in many cosmetic items from lipstick to shampoo. For most people gluten in cosmetics isn't a problem, studies have shown that the gluten molecules are too big to be absorbed through the skin, the only ones to really worry about are lipstick and lip glosss. However, despite these studies, some Coeliacs have reported reactions to cosmetics, usually in the form of rashes, but this doesn't apply to all Coeliacs. If you do have a reaction though there are many gluten free cosmetics becoming available on the market these days.

3. Tablets
There are a lot of tablets which contain gluten, usually in the form of "wheat starch", usually just listed in the ingredients as just "starch". However medicines prescribed by GP's are all gluten free and over the counter medicines will be gluten free if it has a Product License. This being said though, some medications can cause symptoms similar to a "glutened" reactions.

2. Tea Bags
Ok, this is a rare one, as far as we have seen, unless the box states they are all gluten free, it is best to check! Some green teas have been known to have gluten in the seals of the bags, in the cases we have seen this though the box has always stated "contains wheat", just make sure you read the boxes!

1. Envelopes and Stamps
This one still gets me every time, I go to seal a letter and suddenly stick an envelope in my Mum's face for her to lick. Some envelopes and the stamps you lick (which are becoming more and more scarce) have gluten in, working as you would expect, to glue the seal or the stamp. Even though they won't contain a lot of gluten you are ingesting it, so just like with chewing gum it is possible it could cause a reaction.

After being diagnosed my consultant asked my GP to subscribe me with some calcium/vitamin D tablets. However I had to change them for different ones as the label said they contained wheat starch. So the statement that all medication prescribed by GP's is Gluten free is not true. Most are but not all. You should always check the ingredients as I always do.
Suzanne Kirk
23rd April 2015
I have had very expensive supplements that the manufacturers insist do not contain wheat but which have caused a massive reaction for me. I do food sensitivity testing and one of the things that often causes problems is the birth control pill. The best way to avoid wheat is to make your own food and not buy things with lists of ingredients.
Jane Barber
8th April 2015