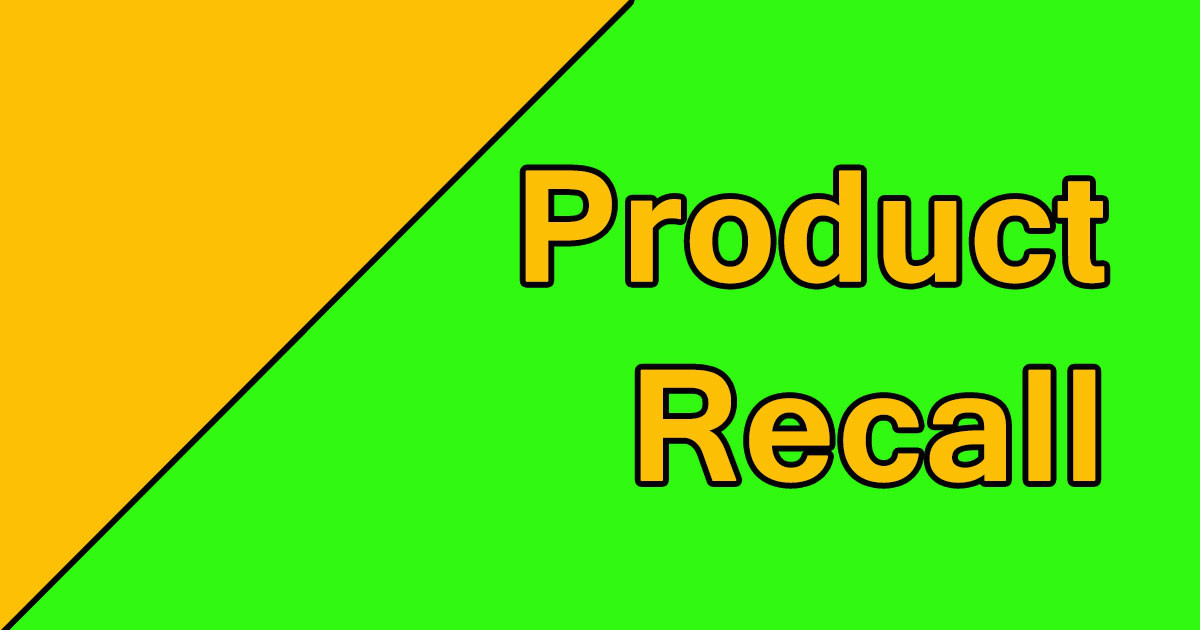 Asda and Sainsburys have recalled a selection of their gluten free products due to the presence of gluten in them, please make sure you have none of the products below.

Today there have been a few product recalls, it started with Asda but we have also been informed that Sainsburys have also recalled 6 of its products, 3 of which are the same as in Asda's range. From this is it evident that both Asda and Sainsburys use the same manufacturer for at least some of their gluten free range, whether the recall is going to extend to Morrisons and Tesco we don't know but no doubt we will find out in due course.

The products have been recalled due to the production site using the incorrect flour batch leading to a warning stating that the recalled products could contain the gluten.

As it stands these are the current product recalls from Asda and Sainsburys, if you have any of the following products with the date/batch code listed please return it to the respective store where you will be given a full refund. If you have already eaten the product we don't suggest regurgitating it so you can return it, instead we suggest Buscopan, peppermint tea and maybe an email of complaint to the store.


Asda have followed up with an apology of "we are very sorry for any inconvenience caused and will ensure it doesn't happen again" along with Sainsburys meagre "we apologise for the inconvenience this may cause", I am sure both these apologies help anyone who has already eating the products (please note the use of sarcasm).

We will update this blog if we hear of any more products which have been recalled due to the same issue.

Edit: 9pm GMT 5th June 2015 Genuis and Livwell have also recalled products for the same issue, if you have any of the items which we have listed in the table above, return to the shop bought from for a full refund

I don't know if this is the same everywhere, but just been into my local Sainsbury's and although half the free from shelves are empty due to the product recall, all the other goods have had the prices put up - really not impressed; surely as a sign of good-will they should have put the prices down?!
Janet Avery
21st June 2015
Thanks for posting this. unfortunately I've only just come across the full list is yours :-/ even though CUK are emailing out theirs isn't as extensive :( what I'm most about is the poor communication surrounding this AND that it's supposed to be a dedicated gluten free site so why was gluten even there??? They are going to have to do a LOT of hard work to try and restore customers confidence and persuade them to buy things they thought they could trust as being safe :(
Vicki Gilbert
10th June 2015
I don't believe this is isolated incident. I feel gluttoned more times in past whilst eating gluten free diet. I have put my trust in these companies to protect me...I pay a higher price for that protection expecting proper gluten free facilities. I am especially disgusted by genius who should have such facilities as we should be their only market. I am weary as I was able to buy a glut of products just before the recall at reduced prices with dates just before the recall dates...I am now concerned about these as shops seemed eager to clear. It seems there is no one to trust when it comes to profit!
Mark
10th June 2015
I have spoken to genius who were extremely apologetic and assured me they were taking this very seriously. I said I know I won't die but it is four days of feeling awful then a period of time for my body to recover, all of which puts strain on the body system. The lady was very understanding. My big concern now though is can we have confidence in them in the future? I worry to about the flour and bread I get on prescription, are they going to appear on this list in a weeks time???
sue
10th June 2015
Yes, it is an offence to sell 'gluten free' food labelled as such to coeliacs if it contains gluten.
Citizens Advice can tell you how to make an official complaint if you are a diagnosed coeliac and you have eaten any of the contaminated foods and had bad symptoms afterwards.
Elle
9th June 2015
This is disgusting, and they gave can nurve 2 charge so high prices, my daughter has just been diagnosed with celiac disease, she sees dietician on wed, at hospital, as well as for our health, its gonna b double the price, then 2 b given sumthing, that's false advertisement, and going 2 make us I'll, on top of that, is a disgrace, wot happened bout quality control as big shots wud say, some proper investigating needs doing here, and appologiesvas well thank u.
lisa livingstone
7th June 2015
I've been wracking my brain trying to figure out how I'd been 'glutened'. I had a curry and Sainsbury's free from naan bread the other day.... Not good. I think they should start putting prices down...
Janet Avery
7th June 2015
After a year of being hyper vigilant we finally have my 4 year olds iron levels at a normal reading and now you tell me that all the careful efforts have been for nought because "gluten free" cannot be trusted. I am angry beyond belief! How can we ever trust these brands again?
Sharon
7th June 2015
Do they have no idea how dangerous eating gluten is for us , it's not a lifestyle choice ,it's very dangerous for our health . These are products i buy and had i have eaten these contaminated one's i would be in HOSPITAL !!!!! I find it hard enough to trust food as it is this just makes you think twice , how can they be so CARELESS!!!!!!!
SAMANTHA WOODWARD
7th June 2015
This may seem like a minor issue to many people, but if you are a sufferer of Celiac Disease then this can be very serious & can cause hospital admission. For those who do not know what Celiac disease is: basically what happens when we ingest gluten our stomach sees it as poison and will attack the stomach villi - the villi absorb nutrients/vitamins from food we eat, because this villi is instantly damaged, it causes symptoms such as chronic headaches or migraines, severe stomach upset, bone and joints pain, brain fog & fatigue to name a few. Celiacs also increase the risk of stomach cancer by 70% if they continue to eat gluten in their diet.

I depend on products like this to enable me to have meal. I struggle enough to buy gluten free food - I cannot trust these companies. I get sick enough without eating a product that will make me poorly again and then take me weeks to recover. Not cool.
Rebekah
7th June 2015
What is the law regarding food poisoning and selling food unfit for human consumption? I know these foods aren't poisonous to the general population but they're not marketed at the general population. To those of us eith coeliac disease or wheat allergy they ARE poisonous and I think the health&safety executive or trading standards should get involved to find out exactly what happened to protect us from it ever happening again. We might be a minority group in their eyes but we should be covered by the protection of law ad be able to eat safely just like any other person. There has been nothing on the news about this either so a huge proportion of the population will be blissfully unaware. What about the gf flour mixes we buy how do we knoe if they're contaminated too? Not a happy bunny. Also worried they're going to use this as an excuse to pump our inflated prices even higher. Can government step in and give us some protection?
holly merry
7th June 2015
sorry but buscopan and peppermint tea won't cut it, last time I was glutened by someone else's mistake resulted in 3 emergency hospital admissions, a twisted bowel, 3 and a half stone lost in 3 months and a packed up thyroid! This is an unforgivable mistake for some of us!!
Tracey
7th June 2015
So ,many of our Gluten free products are not . I can no longer trust these brands. For my family it's not just being glutenated it's actually a matter of life. Our 8 year old has anaphylaxis to any product with wheat, oats etc.
We had a problem with a multi national corporation last year and could not prove that their gluten free pasta caused her hospitalisation. When the pasta was tested it had so many parts wheat in it that it followed European guidelines. That was a hard lesson to learn as they were operating within the law, yet our child had to have 2 epi pens and a three day stay in hospital!
Mel
7th June 2015
This is so bad it has made me very sick. Don't feel I can trust theses shops again.
carol
6th June 2015
why do we pay over the top for wheat free products only to find they are not trust worthy .ive eaten some of these then wondered why I was in pain blaming my own cooking not good to late to return when people have been made poorly .
shirley
6th June 2015