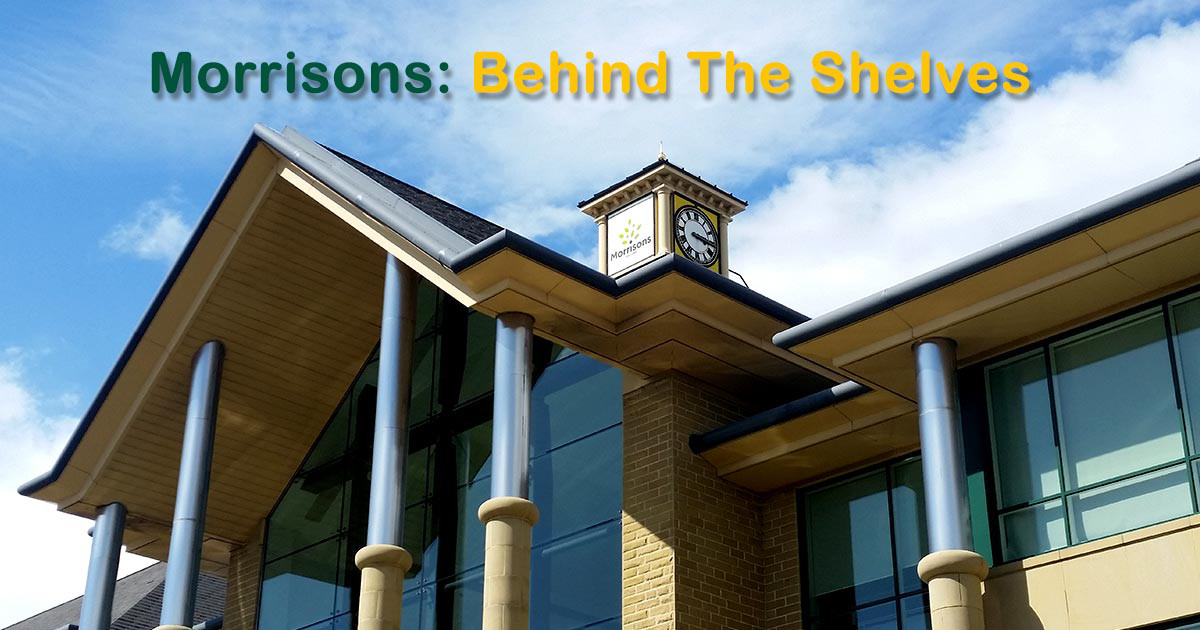 Morrisons: Behind The Shelves

We got invited to go to Morrisons HQ to try out their Christmas range and find out more about what goes on behind the scenes of one of the UK's biggest supermarkets.

Morrisons, one of the biggest supermarket chains in the UK gave us and a few other bloggers the chance to visit their headquarters in Bradford for a Free From event designed for a select few to see what happens behind the scenes of the Free From sections.

With it being what it was, I can't tell you everything but I can give you a nice overview of our day at headquarters and maybe answer some of your questions, those of you that gave me questions to ask on our Facebook, I got answers to most, but for some I can't actually divulge the answers, you'll just have "keep your eyes peeled" so to speak.

So, on the 9th August, after various trains and taxis, we got to headquarters nearly an hour later than planned, yes taxi service which didn't arrive, we are looking at you. Greeted at the door by some lovely staff we obviously missed the beginning of the goings on as we joined a room already half filled with a handful of local coeliacs and coeliac group committee members. Once in there and after introductions we headed for a tour of the building.

It was nice seeing the inner working of Morrisons, the things you don't see in stores, all the customer service and development etc, it was like looking at Morrisons from an entirely different perspective.

Anyway after the tour we had a proper Free From chat with the one person, yes only one person who runs the entire Free From area, from development, planning, finding new products, dealing with the stock, literally everything falls in her hands. And after yesterday, I can't imagine just how much pressure she has to be under!

We were told about the bay layout and how 90 stores now have 6 bays available for Free From products, and 4 stores have increased to 7, something they are still looking at and may or may not happen in other stores. From what it used to be the 6 bay Free From layout is one big improvement from what they had, even at just the beginning of this year, Morrisons was far behind with Free From compared to the rest of the supermarkets but have now pulled out to be on par, if not slowly pulling ahead, and all of this is because of the new bay layout.

We have been told that they plan to roll the 6 bay layout to more stores. I know a lot of you asked why smaller stores don't have as much as others, well we were given an answer to that without asking. The Free From lady is allocated slots in each store, dependent on the size of the store, with these slots she can fill them with whatever Free From products she wants to add, what she knows is most likely to sell depending on sales from other stores. Bigger stores are allocated more because they have the room, unfortunately Free From isn't a big seller although various people need it, but it's based on a select area, compared to other sections it doesn't sell, so she is allocated less room, the smaller the store the less room she is allocated to work with, other bigger selling items will come first. She is fighting to get more products into smaller stores and the plan to increase is there, so keep getting onto Morrisons about wanting more in stores and hopefully they will get the extra slots in they need.

In terms of the bays we were told how the layout is worked out strategically and how well something sells depends on whether it gets more than one slot on a shelf, if an item is a really bad seller something else will more than likely end up in it's place. This is why Genius bread takes up most of the bread section as this is one of the best sellers so had more allocated room.

From that we talked about other bits, most of which unfortunately I cannot talk about, so heads up, look out for new products soon. We also talked about the cafe, I also can't mention anything about that, but I can say that most (including my local as I have already eaten there) should be stocking prepacked sandwiches like in snack and go sections along with a prepacked cake. Fingers crossed the cafes will be more adept at gluten free soon. I mentioned that I had been asked about gluten free macaroni a few times as it's difficult to get, I was told the Heinz one was taken off the shelves because they'd had many reports that the quality wasn't good and didn't sell well, she did write it down as something to look into as it is a hard to get product.

Next we went to the development area for lunch. Every product stocked in store is taste tested here over the year, Free From or otherwise, today the head chef prepared us a Christmas dinner using all Morrisons stock, starting with a simple gluten and dairy free prawn cocktail. Main course was an indulgent Christmas dinner with turkey, lamb, Mrs Crimbles stuffing, Schar Yorkshire puddings, Isabels gravy, Ocean Spray cranberry sauce, roast potatoes, sprouts and carrots. Eating Christmas dinner in August was very weird but that is what they are working on at the moment, new Christmas products, so we got to join in. Dessert was a rich Christmas pudding which they had on sale last year.

After we were stuffed from that, we did a bread activity with Genius and learnt how they had to deal with unpredictable ingredients, how one batch can end up entirely different from another just because the products are so unstable and can work differently everytime despite being the same amounts. This was very interesting to see how different starches react and why various natural products have to be added in an attempt to stabilise them.

From there we did a few other activities which again I cannot discuss but they took a good hour! After that we were told we would get a goody bag and they had six manufacturers for us to meet in the conference room so took us round there.

In the conference room were Schar, Gosh, Perkier, Alpro, Heck and Genius, set up like a Free From fair with samples to try and stuff to give away. There was only 20 of so of us so we got to chat to each of them, take part in giveaways (I won one!), and get samples. When they said we'd get a goody bag we expected one...not 7, one from each of the manufacturers plus one from Morrisons, in total we had a good £150 worth of free products given us!

It was a very interesting day and we were honoured to be invited. I can't remember most of the bloggers but I do know Happy Igloo, Free From Farmhouse and Gluten Free Joeyanne were three of them so go pay them a visit (if you are one of the other three that were there let me know and I will mention you too!) They aren't all only gluten free, they are based round all kinds of allergies but worth a visit. Thank you to Morrisons for inviting us and giving us a chance to see what goes on behind the scenes!

I'm.gluten free and dairy free in my local morrisons in Hastings there doing gluten free pizza fresh create your own you cannot make them in the same area where you make the other pizza as you are contaminating the food I have two different areas in my kitchen so I don't mix my food with what The rest of my family have I for one will Never buy a freshly made pizza from your shop if it's made in the same place where you make the others pizzas YOU NEED TO MAKE SURE YOU HAVE A DIFFERENT PLACE FOR THEM TO BE MADE
caro Taylor
27th May 2019