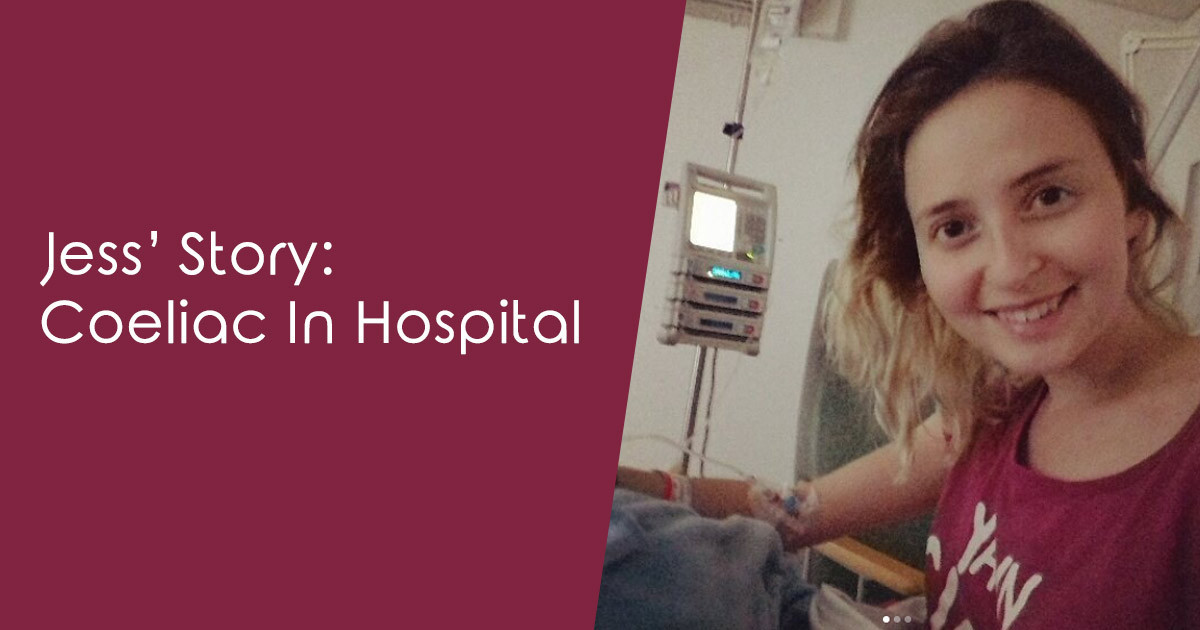 If you have to have a stay in hospital it is always scary and adding on what you can eat makes it even more nerve wracking, Jess shares her experience of staying in hospital and eating gluten free.

20 year old Jess has recently been in hospital, I have followed her for a while on Instagram where she reviews gluten free products and when she stayed in hospital I kept checking her posts, after a few days I began wondering how much curry a person could take. I asked Jess to share her story, no one likes a stay in hospital, but as a Coeliac it's can be even harder. This is a first hand account of a Coeliac's stay in hospital and her tips (please note not all hospitals will be the same, it will vary hospital to hospital, this is only Jess' account). You can find Jess on Instagram @the.critical.coeliac

My name is Jess, I'm 20 years old and was diagnosed as a Coeliac in 2014, I also have Ulcerative Colitis which is a former of Inflammatory Bowel Disease. My Ulcerative Colitis recently lead to a 3 week stay in hospital and an operation to remove my large intestine. I know that as a Coeliac, spending time anywhere where you are no longer in charge of your own diet can be quite anxiety provoking so I thought I'd share my hospital experience for anyone that is curious. Of course this is only my experience, on a different day, in a different ward, hospital or trust it could be completely different. That said, I thought you'd be interested to hear how I got on and the things I learnt during my stay.

I'll start by explaining that, due to a plumbing problem, I spent my first 2 weeks on what was basically an 'overflow ward'. I mention this because the staff that were transfered with us were unfamiliar with the ward, it's routines and it's layout which I think affected the quality of my care, including their ability to meet my needs as a Coeliac.

In hospital they come around with a computer to order your meals 24 hours in advance. On my first day I obviously hadn't ordered anything so it was a case of being given whatever gluten free items were around. I'm not a picky eater so this wasn't a problem. When staff came around that day they were able to select 'gluten free' as a dietary requirement on the system which brought up a list of options. These options were the same for lunch and dinner and, unlike the regular rotating menu, did not change from day to day.

The gluten free options were: jacket potato and beans, fish in sauce with potatoes and veg, jacket potato with vegan chilli, and approximately 8 different curries. Of the curries, one was a 'British' korma and the rest were proper 'foreign' curries made with lots of spices and halal meat. Personally I wouldn't usually choose halal meat as I don't agree with the method of slaughtering, I did eat some halal chicken whilst in hospital but if this is something that bothers you then it's worth being aware that the majority of gluten free options included halal meat, though there were veggie and vegan curries too. For pudding I had a choice of rice pudding, creme caramel, or various fruits. Each meal came with a carton of orange or apple juice.

The meals were all ready meals that had been microwaved and were served in a sealed plastic container. Whilst this didn't look appetising it was quite reassuring as I knew there was no risk of cross contamination and each meal had the ingredients and nutritional information written on the front which allowed me to double check everything I ate. In terms of taste, the food genuinely wasn't too bad, the only things I really couldn't stomach were the carrots and the jacket potatoes which both had a strange, distinct, not very pleasant flavour. The curries were actually very nice though I had to stop ordering them due to the spice and my upset stomach.

Unfortunately there were a few issues on this ward. On a couple of occasions I was brought random puddings which were not gluten free. Fortunately I knew straight away that I was not supposed to be eating pineapple upside down cake or tiramisu but I would be concerned about new/confused/poorly coeliacs who put their faith in the hospital staff providing safe food for them. On one occasion the lunch trolley came, went and brought me nothing so my mum had to bring me some lunch in.

Breakfast was a daily challenge as nobody was able to tell me if any of the cereal was safe for coeliacs. After approximately 4 days in hospital I was given a (nearly out of date) genius loaf and toastie bags, which was great, although oddly the staff seemed to struggle with the toasting element. I don't know if the bags confused them or what but a couple of times I was presented with a plate of lukewarm semi-stale bread. On almost my last day a little tub of gluten free cornflakes was delivered which was a nice surprise. On the whole though, breakfast always seemed to be a bit too complicated. Nobody was sure what to do so I ended up having breakfast 4 out of the 21 days I was admitted.
.
After my surgery I moved to a different ward. At first the meal options were exactly the same as the previous ward (although shepherds pie did suddenly appear). As I had an ileostomy I was told to avoid spicy and high fibre foods which basically meant most of my already limited menu was now off the cards. For several days I had shepherds pie or fish in sauce for every meal. Around day 18 the dietician came to speak to me, I made an offhand comment about my limited meal choice and she said she'd take a look at my options. The next day, low and behold, a miracle occurred! My menu changed! All of a sudden there was casserole, risotto, GF chicken nuggets, GF fish goujons, mash, gravy, chips, yoghurts! Why this wasn't done sooner I don't know. Rather than choosing a whole meal as I had done before, it was now broken down so that I chose a main, a carb and a veg in whatever combination I liked. Each item was served individually in a little takeaway style container and had my name and 'GLUTEN FREE' written on the front.

Another thing I noticed was the calorie content. With no breakfast most days and a lot of the gluten free options being 'balanced choice', even scraping the plate my intake would have been consistently under 1000 calories per day. If it wasn't for some serious snacking and emergency food parcels I would have lost quite a lot of weight after 3 weeks living on hospital food, weight which I couldn't really afford to lose.
There was a free snack trolley that came round on the second ward however it stocked cakes, biscuits or walkers crisps. I can't say if there were any coeliac alternatives as I was never brave enough to ask but I suspect it would have just been fruit. It's easy to see how a coeliac could end up quite short on calories without snacks on hand.

So what are my tips?

1) If you want breakfast, bring your own box of cereal. For the amount it costs and the hassle it saves, just do it.

2) If you're going to be in there for any length of time ask to see the dietician!

3) If you have multiple dietary requirements definitely ask to see a dietician!

4) Check everything. Read labels. Hospital staff are stretched and stressed and mistakes happen. If you're given something you haven't ordered it might not be safe, don't take chances.

6) Be assertive. I wasn't and in hindsight I regret it. Hospitals should have the basics in to cater for you, if you're being underfed it's going to slow your recovery so speak up if things aren't right.

7) If you're a picky eater you may struggle. At the end of the day hospitals have limited facilities and lots of requirements to cater for and sadly there is a limit to the choice available. I was fortunate enough to have family bringing in flasks of pasta and soup when I was desperate and a well stocked supply of pick and mix. Tell visitors what you'd like bringing in, staff will probably heat up ready meals and store things in the fridge for you if you ask nicely enough.

Hopefully you'll never need a stay in hospital but forewarned is forearmed! If you have any particular questions feel free to contact me.
You can find Jess on Instagram @the.critical.coeliac

I had to spend a few days in Borders General Hospital. Being coeliac myself. I could not speak highly enough of the varied gluten free menu I had, I was catered for in every way from breakfast lunch and dinner. There was something different every day. I enjoyed everything I had. Lorna
lorna
18th October 2017
I am gluten n dairy free. I took my own milk they did have rice crispies. Dinner n supper was either jacket potatoe or tiny salad from the restuarant either ham or chicken. That was it. Sovhad to get loads of my safe snacks brought in for me. The roasts even had gravy already on so could not have those. If gluten n dairy free never go into Medway hospital. Apart from that tgeir care was amazing.
Irene Lamb
3rd October 2017