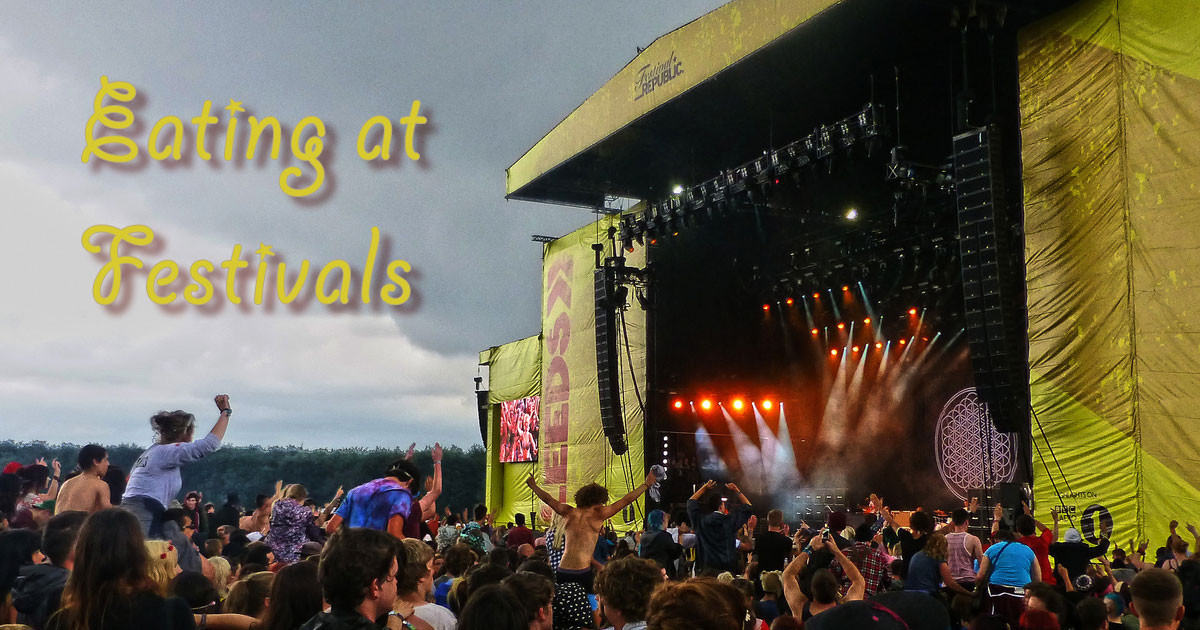 If you are heading to a festival this summer it isn't always easy to find gluten free food so here is a blog with a bit of advice on the matter.

Since it is coming into festival season we though we would try and summarise what you can expect to find at festivals that meet a Coeliacs dietary requirements, something that isn't always easy when you have the choice of only eating from stalls and the risk of cross contamination in some isn't the best.

Being a music fan myself I have been to some smaller festivals such as slam dunk or localised festivals, I tend to find at these you only get one or two fast food vans however they usually let you out so you can go wherever you wish outside of the host venue(s). If they don't give out exit and re-enter passes then they will usually issue a "bring your own food" pass for people with dietary restrictions for one of these you usually have to ring in advance stating why you need to bring your own food in.

Glastonbury festival probably have the best selection of gluten free vendors that we know of, they usually have over 20 different places offering gluten free food and this year appears to be no different, for a full guide head for Glastonbury 2015 over to Gluten free Cuppa Tea where Rebecca has put together a fantastic blog listing everything GF there this year - The Best Gluten Free at Glastonbury Festival 2015

Download 2014 had very little in the way of gluten free, so make sure you pack plenty of gluten free goodies to take with you (we have given a quick guide of what you should consider taking at the bottom of this blog). As far as we know there are salad stalls, one stall called DeliKate that specialise in gluten free (if they are there this year) and there has been known to be a hot dog stall and a couple of others offering cakes however we don't know if they are going to be there this year so it is probably wise to check with festival organisers but I have been told some of those who could cater last year struggled with the cross contamination side, so we suggest taking GF sausages and bacon for breakfasts as well as as much non perishable food as you can manage to carry just incase!

Latitude festival usually have a few stalls which can cater well to coeliacs, in 2013 there was a nice variety, unfortunately I can't tell you want was there last year or going to be there this year but if it is anything like 2013 you should be able to get gluten free vegetarian food, pizza, salad, nachos, cake, indian pakoras and risotto as there were stands for all of these and the same caterers usually go back year after year.

For Reading and Leeds we don't know whether you can be catered for or not, as we can't find anything about whats on offer, or has been in the past, so we suggest taking your own food with you, last time I went I wasn't gluten free, but noticed there was a lot of choice so I am hopeful there would be one or two that could cater, there was one stall that only served chips and indian usually use gram flour so these should offer at least an option or two.

V Festival last year saw Kabuto Noodles offer gluten free miso as well as options for pizza, risotto and paninis amongst some other options, hopefully they will all make a reappearance this year.

If you are going a festival, we think your first port of call should be to contact either the organisers or the caterers to see exactly what is going to be there food wise and whether there is anything suitable for Coeliacs, if they're is nothing then obviously the next port of call would be to make sure you have enough of your own food to survive, we suggest taking these - Also don't forget in terms of alcohol, unless you are lucky enough to find a stall offering gluten free beer, beer is off limits, however cider and plenty of other alcoholic drinks are gluten free. If you aren't drinking, beware of the coke pumps, if anyone has had a shandy before you that nozzle has been in some beer, so make sure you try and go for cans or bottles!