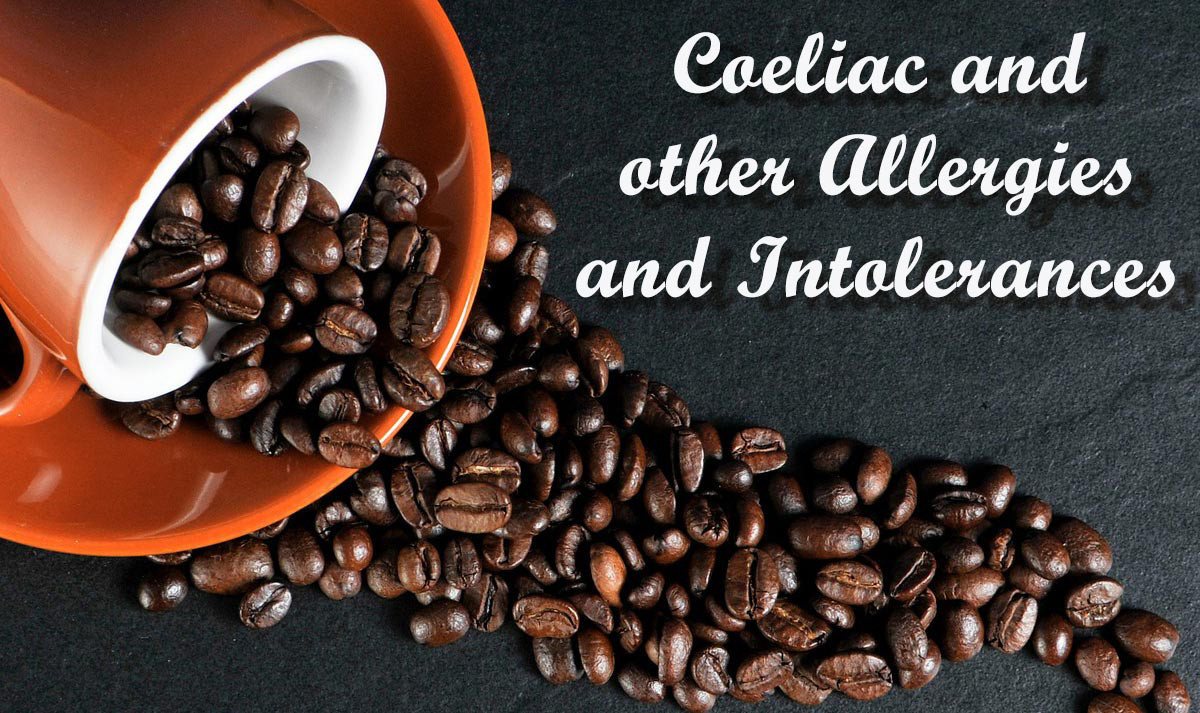 Coeliacs and Other Allergies/Intolerances

It's common to have other allergies to other foods alongside having Coeliac Disease so we asked what food allergies people had and these were the top ones.

We were wondering here at Coeliac Sanctuary whether people with Coeliac or gluten sensitivities also suffered from other food allergies and intolerances due to the fact that we often see people say they got glutened but haven't had gluten. It got us thinking that maybe other elements can set off the same symptoms in people with Coeliac or generally effected by gluten. We wrote a blog last week about so called "cross reactive foods" (foods which apparently a lot of Coeliacs can't tolerate due to the "similar protein makeup" of gluten) but after backlash, a temper tantrum and further research resulting in finding that at least one of the "research studies" we were consulting was more than likely more than poop we deleted it.

However our wonderings were still there and we wanted to know what other food affected Coeliacs, if any, obviously there are people who only have to avoid gluten. I thought I fell into that group, since my lactose intolerance seems to have disappeared but when I thought about it more I do have another allergy, one I have had for many years but find it so easy to avoid that I almost forgot about it...Kiwi's. If you want to see someone who's lips look like they have been pumped with botox come and see me when I've indulged in this lovely green fruit!

With our minds wondering we wondered how we could find out about other peoples allergies, so we decided to ask on our Facebook page and just to see if we could get a few more responses, we asked on Facebook group Gluten Free and Me (you can see all the answers on that post here if you wish) too. In total 76 people replied with other things that are allergic or intolerant too, in some of the intolerances only appeared after being diagnosed Coeliac and others having had the allergies all their lives.

Now I am not saying the allergies and intolerances are related to Coeliac in anyway, people are often allergic to one thing or another, Coeliac or not. However I may be suggesting that gluten on it's own may not be the only thing that can set of glutening symptoms in some people, and it may be worth keeping a food diary for a few weeks to see if there is any factors which are there all the time that could be causing gluten reactions especially if you know 100% that you haven't ingested gluten but are getting the symptoms.

It was clear from the responses there were two food substances that people also reacted to; Dairy and Coffee. Out of the 76 responses, 46 said dairy effects them, although it wasn't necessarily all dairy, for some it was just milk or yogurt but for others it was anything dairy. For coffee there was less people reporting intolerances at 27 out of 76, there have been numerous blogs (like this one for example) about how coffee should be avoided if you have Coeliac, but like people pointed out with cross reactive foods, there is no concrete proof that coffee causes any problems with Coeliac unlike with dairy, it is know that it is an irritant and can cause already damaged guts to be more senstitive, even in none Coeliacs.

It is common knowledge that with Coeliac, lactose intolerance is a popular, yet usually temporary issue experienced, usually within the first year. I, for example, couldn't tolerate ice cream or milk for about 10 months after being diagnosed, but eventually my gut healed enough to tolerate it again and I no longer get nauseous or bloat up when I enjoy a bowl of ice cream, as long as I don't go overboard. The same goes for a lot of Coeliacs, 46 of 76 told us that they couldn't tolerate at least some forms or dairy but out of them it is likely some of them will be able to tolerate it again in the future. You can find out more about lactose intolerance in Coeliacs on the Coeliac UK website.

So what other allergies did people tell us about? Well they varied, the main stand out ones were dairy and coffee, but they varied all the way down to vanilla and colourings. 13 of the 76 mentioned a product that only effected them (no one else mentioned them in the responses at least) and around 5 products only got mentioned by 2 people. Ironically Rice, Buckwheat, Potatoes and Corn were all only mentioned once or twice, but are supposedly all part of the 19 cross reactive foods along with dairy, eggs and coffee. So to us the cross reactive foods seems maybe a little hit and miss and is different for everyone, as with any allergy.

Here's the list of the top 10 foods mentioned by the 76 people (the majority of people had more than one allergy/intolerance too, with some even having reactions to 10+ food products).

6 of the apparent 19 cross reactive foods were in the top 10, we know only 76 told us their other allergies, this is no scientific study and yes a lot of Coeliacs suffer other allergies and intolerances, but we don't think it's possible to conclude that 19 specific foods are to blame (even less so when there is no scientific proof behind the cross reactive foods). Anyone can develop an allergy to anything, hey after a stoke my Dad could no longer eat his favourite food, beetroot, and now goes into anaphylactic shock with it, so it's by far not necessarily Coeliac related to develop an allergy, particular to food which are known to be common allergens. There is no solid scientific proof to say these foods "cross react" but if you do suffer symptoms of glutening it may be worth trying to remove any of the more common ones (dairy, coffee, eggs to start with) you consume to see if they improve your symptoms.

I read somewhere once that the enzyme which digests lactose is made near the tip of the villi which regrow in coeliacs when we go gf so that explains the renewed ability to cope with dairy, I still avoid having too much cow milk products and seem to tolerate ones made from unpasteurized milk better.
Apparently there are quite a lot of coeliacs who have the connective tissue disorder ehlers danlos syndrome, and in that condition there's a high prevalence of mast cell disorders which don't show on regular allergy tests but are a histamine based over response which can be triggered by certain foods...
fritz
28th October 2015